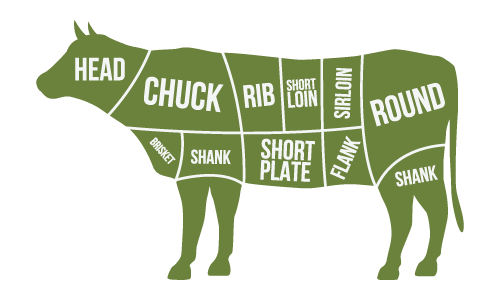 If you order ¼ cow we try to give you a sample of parts from all of the cow, not just the rump or the shoulder.  We try and match your order with a similar order and give you cuts as close as we can to the cuts you select.  In order in ensure getting all the cuts you want, you must purchase at least a side.

Regarding special requests…this is your cow! The butcher will do whatever you want, just ask — they are great! Feel free to call them if you have specific questions.

A very popular steak cut from the rear end of the short loin; the name originated from the days when it was served in public alehouses that also served a dark beer called porter. The porterhouse consists of both tenderloin and strip steak. The tenderloin is often served separately as filet mignon.

Cut from the middle section of the short loin; similar to the porterhouse steak; has a smaller piece of the tenderloin; usually grilled or pan-fried.

Often considered the tenderest cut of beef; responds well to sauces, meaning the meat does not overpower the flavor of the sauce. It can be cut as the whole strip, or into individual steaks for filet mignon.

These steaks are available in a variety of boneless and bone-in steaks.

Excellent when dry roasted or marinated.

This section is best used for stew meat, where its rich, beefy flavor can be appreciated.

A leaner cut of the brisket, for those who want the flavor but not the fat of a brisket pot roast.

Learn About Our Pasture Raised Beef Shares   /   Ask Us A Question

Thank you for supporting local.

BECOME PART OF THE FARM

We hope you enjoy the fresh flavor as much as we do!